The Sun and Mental Health -- That Front Page 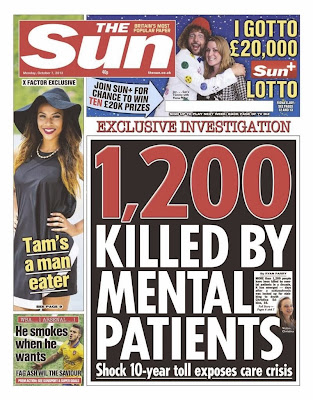 The Sun’s full page headline today (7th October 2013) states baldly “1,200 killed by mental patients”. The number 1,200 is in red letters 2 ½ inches high. In tiny letters to the side of this headline is the admission that this figure was the total over a decade.


It’s hard to know where to start in a dissection of this report.


That huge red number is clearly intended to alarm. One has to conclude that the Sun wishes to suggest that its readers are all at risk of being murdered in their beds by homicidal maniacs.


The Sun’s use of the term “mental patients” is not only deliberate use of a term with pejorative implications, but also implies that there are two sorts of people: “normal” people (Sun readers perhaps?) and “mental” people, people who are unpredictable and potentially dangerous.


Having emblazoned its front page with this frightening statement, the Sun’s “full story” is buried on pages 6 and 7. It begins: “A Sun investigation today reveals disturbing failings in ’s mental health system that have allowed high-risk patients to kill 1,200 in a decade.”


The article is fringed by 12 brief accounts of people who have been murdered by “mental patients” over the last few years.


So where did the Sun obtain these figures? It mentions “a study”. This can only be the Annual Report The National Confidential Inquiry into Suicideand Homicide by People with Mental Illness, published by the in July 2013.


The Sun’s “probe” (their word), must have taken all of 30 seconds before finding this study, which was published 3 months previously in July. Community Care published a thoughtful article back on 5thJuly 2013, headlining their article with a quote from the Report saying: “The number of homicides committed by mental health patients has fallen ‘to its lowest level for a decade’.” The writer of this report, Julian Hendy, goes on to express skepticism of some of the figures.


The Sun reports that 122 people a year on average were killed by “mental patients”. This would appear to have been lifted from Community Care’s article.


The Sun goes on to lay the blame for these figures on “the slashing of budgets for mental health care”. They quote Marjorie Wallace of SANE as saying that “homicide figures may not have increased in decades – but significantly they have not declined either.”


So what does the report actually say?


Right at the beginning of the report, it is stated: “Homicide by mental health patients has fallen substantially since a peak in 2006, and the figures for the most recent confirmed years, 2009-2010, are the lowest since we began data collection in 1997”.


Although the report acknowledges that some of its statistics may be incomplete, it does say “it is likely that this is a true fall in patient homicide”.


Already, this seems to be factually at odds with the Sun’s report. While I do not wish to minimise the potential effects of recent cutbacks to spending on mental health, in this case, recent changes in mental health legislation and delivery are given as a possible explanation for this reduction, citing the use of CTO’s as a potential factor.


Another failing of the Sun’s “probe” is to place these figures in any sort of context. The Office of National Statistics provides illuminating statistics for overall numbers of homicides.

It gives statistics going back to 1960 for homicides initially recorded by the police. The long term graph shows a gradual increase in homicides from 282 in 1960 to a peak of 1047 in 2002-3. Since then, there has been a steep fall to around half of that peak.


Taking the ONS statistics, it can be seen that during the 10 year period from 2001-2011 on which the Sun bases its figures, there were a total of 7926 homicides. This compares with the figure of 1220 homicides committed by mental health patients quoted by the Sun and Julian Hendy. In other words, a little over 15% of homicides were committed by people who were known patients of mental health services. To put it another way, 85% of murders were committed by people who weren’t “mental patients”.


But I suppose the headline: “You’re 6 times more likely to be killed by a “normal” person than someone with mental health problems” doesn’t have quite the same ring to it.
Posted by The Masked AMHP at 23:06

Why not join? With over 6,700 members, it's an ever growing, but nevertheless friendly and supportive group. AMHPs, AMHP trainees, social work and nursing students, service users, carers and relatives, and others with a professional or personal interest in mental health, such as psychiatrists, nurses, psychologists, police officers and bloggers, all get on together (most of the time!). It's a great place to pose a question or discuss thorny issues relating to the Mental Health Act, the Mental Capacity Act and mental health in general.