On Being Observed While Doing Your Job 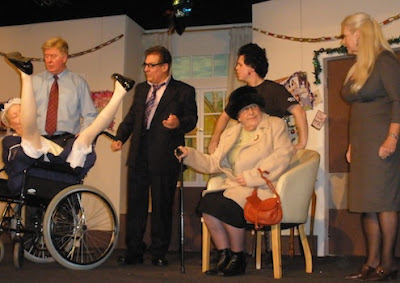 The Masked AMHP (in a suit) attempting to interview in a suitable manner -- with hilarious results. Publicity shot from the stage production of "Ooer, Missus, It Shouldn't Happen to an AMHP!" ﻿

Every five years, AMHP’s have to provide evidence to their local authority of their competence to continuing practicing. One of my local authority’s recent mandatory requirements for being reapproved in the role of Approved Mental Health Professional is to be critically observed and assessed while actually undertaking a live Mental Health Act assessment. Scary or what?


Although there are many professions who are often in the public eye while doing their jobs (teachers,  police officers and nurses to name just three), AMHP’s are possibly more closely scrutinised while performing their duties than most.


A typical MHA assessment in someone’s home, as well as the patient, of course, can easily include two doctors, two or more police officers, a couple of ambulance crew, the nearest relative, and the patient’s care coordinator. There can also be an AMHP trainee shadowing the AMHP, and possibly even students from other professions. That’s a possible total of 11 or even more. And some of them may be fairly hostile to the AMHP’s role, especially if they’ve formed their own lay assessment of the situation.


While Mental Health Cop on his blog is valiantly attempting to educate his colleagues on the law relating to people with mental disorders, police officers nevertheless often find it difficult to understand the factors that AMHP’s legally have to take into account when assessing a patient for possible compulsory hospital admission. And ambulance drivers and paramedics often have alarmingly little knowledge which they are then very keen to exercise.


The nearest relative or other carers will frequently be experiencing a range of distressing emotions, and whatever decision you make may be a source of additional distress to them. They may be reluctant to recognise that their relative needs to be admitted to hospital. They may be upset by a decision to admit, as it means acknowledging that they can’t cope with the behaviour of their loved one any more any longer. Equally, they may be upset by a decision not to admit.


All of this means that AMHP’s often have to explicitly articulate the process of assessment to others, almost in the way that a surgeon may narrate a procedure to medical students and other junior staff in the operating theatre.


This is, of course, no bad thing. A vital part of the AMHP role is to know at all times what one’s legal powers and responsibilities are, and to be able to explain this to all others involved in the assessment in such a way that it can be clearly understood.


The patient needs to know why you are there and what you are doing; the nearest relative needs to understand their specific role as the NR within the meaning of the MHA; and you may need explain to ambulance crews and police officers what their legal powers and obligations are in assisting the AMHP to manage the overall process.


And when the assessment has been completed, the AMHP has to write a formal report on the assessment in which they will need to justify their actions and decisions in case of future challenge.


After a while, stage fright can be overcome, and the AMHP can perform their functions with quiet competence. Being a still point of confidence and calm in the midst of chaos and fear can be of enormous importance.


Nevertheless, there are few professions who are subject to a formal assessment of their competence in such a live situation. Teachers are one such profession, as they have to teach a class in front of OFSTED inspectors when required, with hardly any notice.


Being shadowed by a student or trainee AMHP is something I actually rather enjoy. It keeps me on my toes, it makes me think very carefully and explicitly about why I do what I do and why I make the decisions I do. Trainee AMHP’s in particular are good at asking awkward questions during the subsequent debriefing (Why did you do that? Why did you say that? Wouldn’t it have been better if you’d done so and so?)


So the day came when it was planned that one of my AMHP colleagues would shadow me while doing a MHA assessment. We sat together in the AMHP office, where the day’s duty AMHP’s sit and wait for referrals to come through. And a referral did indeed come.


Aaron was a 19 year old young man who lived with his parents. He was a patient of the Early Intervention in Psychosis Team, as he had presented a few months ago with the first symptoms of psychosis. But he also had marked autistic spectrum traits. He had been fairly well controlled with an oral antipsychotic, but because of side effects, the dose had been reduced, and his behaviour had become more disruptive and difficult for his parents to manage.


His mother had taken him to see his GP, but he had become anxious and agitated and had run out into the street, ignoring traffic and potentially putting himself at risk. The police had been called, who quickly apprehended him, and because of his continuing behaviour in the police car, during which he almost succeeded in climbing out of the window and onto the roof of the moving vehicle, he was taken to the S.136 suite.


And that was where he was on referral.


From the moment of taking the call, I was being observed and assessed. My actions and decisions were being constantly monitored – arranging for a Sec.12 doctor to attend, speaking to the patient’s mother and establishing which of the parents was the NR for the purposes of the MHA, consulting with the Early Intervention Team to get background information, and scanning the patient’s electronic notes.


My AMHP observer, the Sec.12 psychiatrist and I went together to the S.136 suite, where two police officers and his mother were with the patient.


I explained to Aaron what my role was and what tasks I had to undertake. He stared at me fixedly, then as soon as I had finished said, “Can I go home now?”


This was a frequent response to questions I asked him throughout the assessment. He appeared to have only limited understanding of the reasons for his detention and the purpose of the assessment, despite my attempts to explain this to him. Throughout the assessment he maintained fixed eye contact and displayed no facial expression or emotion, although there was implicit evidence of agitation and anxiety. However, he was unable to verbally acknowledge or express this.


He was very guarded during the assessment and was reluctant to discuss any possible psychotic phenomena. He often only answered questions with yes or no answers, and had difficulties with open questions. He eventually said that he had left the doctor’s surgery because he had been disturbed by the doctor’s use of the computer, but refused to enlarge on this. He said that he was willing to take medication and willing to engage with the EIT or the CRHTT if considered necessary. His preference was to return home.


So what would my decision be? I needed to use the information I had obtained, combined with the consultation with the patient, and with his mother.


The Early Intervention Team told me that Aaron had been considered a few weeks ago for compulsory detention, but they had concluded that he could be managed by them in the community. They had also concluded that in view of his autistic spectrum traits, admission to an acute psychiatric ward would be likely to make him worse, and increase his anxiety and agitation. They told me that they would be happy to continue with this plan.


His mother, on the other hand, was concerned about her ability to stand up to Aaron’s demands on her, and worried about how to respond if for example he went off on his bike. However, she did concede that he was capable of cycling from their village into Charwood, where he would go into shops or go to the library. Although she was not prepared to say it openly, I could tell that she would rather he was admitted to hospital.


The psychiatrist was doubtful that compulsory admission was indicated. The discussion with him was helpful. In conjunction with the psychiatrist, the Early Intervention Team, and Aaron and his mother, a short term plan was constructed.


Aaron would not be admitted to hospital. The psychiatrist recommended a change to his medication, and he was also given some diazepam that his GP had prescribed. The Early Intervention Team would increase their input in the short term. The psychiatrist spoke to the GP on the phone in the S.136 suite and faxed his assessment and recommendations to the surgery.


This plan would be open to constant review, and it was made clear to Aaron that if his mother felt unable to manage his behaviour, then a further assessment would become necessary.

Aaron and his mother went home. The police officers vacated the S.136 suite. My observer and I returned to the AMHP office for an in depth debrief. And of course, I had my assessment report to write.

At the end of it all, it felt quite satisfying. I had quite enjoyed the experience of being formally assessed. It was all part of the job.
Posted by The Masked AMHP at 17:56

Email ThisBlogThis!Share to TwitterShare to FacebookShare to Pinterest
Labels: AMHP Powers and Duties

Why not join? With over 6,800 members, it's an ever growing, but nevertheless friendly and supportive group. AMHPs, AMHP trainees, social work and nursing students, service users, carers and relatives, and others with a professional or personal interest in mental health, such as psychiatrists, nurses, psychologists, police officers and bloggers, all get on together (most of the time!). It's a great place to pose a question or discuss thorny issues relating to the Mental Health Act, the Mental Capacity Act and mental health in general.