A Stroll Down Memory Lane: The Lunatic Asylums Act 1853 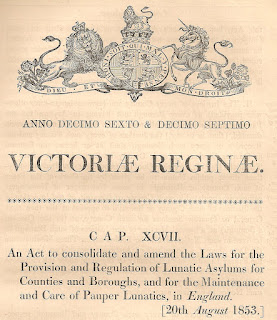 But there was mental health legislation even before then. The Mental Treatment Act 1930 introduced the concept of “treatment” for mental illness, rather than just containment, although it only required two medical recommendations to detain someone in hospital. The concept of an “informed layman” to adjudicate in detentions to hospital was a major innovation of the 1959 Act.

And then in the distant past there was Victorian legislation to contain and control people with mental illness (or “lunatics” as they were then known).

I have an original copy of An Act to consolidate and amend the Laws for the Provision and Regulation of Lunatic Asylums for Counties and Boroughs, and for the Maintenance and Care of Pauper Lunatics, in England, or the Lunatic Asylums Act 1853, as it was otherwise known. It makes interesting, and even surprising, reading. Within it, one can detect the origins of today’s legislation.

Much of this Act, unsurprisingly, lays down requirements and regulations concerning lunatic asylums. Much of this is laudable, as it establishes basic welfare requirements for the care of mentally disordered people. This was the Act which resulted in the building of most, if not all, of the Victorian asylums, some of which still exist.

The Act established Committees of Visitors, whose responsibility it was to build and maintain lunatic asylums, as well as to ensure the welfare of their inmates. Section 54, for example, states that “Every Committee of Visitors shall fix a weekly Sum to be charged for the Lodging, Maintenance, Medicine, Clothing, and Care of each Pauper Lunatic confined in such Asylum.” This sum was not to exceed “Fourteen Shillings per Week.”

Within this Act were the embryonic requirements of Sec.136 of the 1983 Act, relating to police powers to detain people who appear to be mentally disordered in places to which the public have access. Sec.68 of the Lunatic Asylums Act states: “Every Constable of any Parish or Place...who shall have knowledge that any Person wandering at large within such Parish or Place.… is deemed to be a Lunatic, shall immediately apprehend and take or cause such person to be apprehended and taken before a Justice.” The Justice could then arrange for the person to be examined and if necessary detained in an asylum.

This section also gave Constables powers and duties concerning the welfare of a Lunatic “who is not under proper Care and Control, or is cruelly treated or neglected by any Relative or other Person having the Care of Charge of him”.

One can also find the origins of Sec.2, Sec.3 and even Sec.4 of the 1983 Act for detaining people. Back in Victorian times, there was a very clear distinction made between “Pauper Lunatics” and others. The lunatic asylums could contain both Pauper Lunatics and Private Patients; it appears, however, that they were treated differently.

Sec.73 relates specifically to the detention of Paupers, stating that Pauper Lunatics had to have the appropriate paperwork for their detention to be legal. This included an order from a Justice, a clergyman, an Overseer, or the Relieving Officer (under the Poor Law), along with a medical certificate signed by “One Physician, Surgeon, or Apothecary, who shall have personally examined him not more than Seven clear Days previously”. It was a misdemeanour to admit to an asylum without such order and medical certificate.

Sec.54 is devoted to people who are not paupers. They have to have a medical certificate signed by not one, but two physicians, surgeons, or apothecaries.

In both cases, a statement also had to accompany the patient. This had to include the following information: name of patient; sex and age; married, single of widowed; condition of life and previous occupation; religious persuasion; whether first attack; age on first attack; duration of existing attack; supposed cause; whether subject to epilepsy; whether suicidal; and whether dangerous to others.

Also within this section is the origin of Sec.4 of the 1983 Act: “Any Person may, under special Circumstances preventing the Examination of such Person by Two Medical Practitioners as aforesaid, be received into an Asylum upon the Certificate of One Physician, Surgeon or Apothecary alone” providing that it was accompanied by a statement setting forth these “Special Circumstances”. In any case, a second medical recommendation had to be provided within 3 days.

There were also rules for discharge from asylums. While there appears to be no provision for appealing against detention, a lunatic could be discharged on the application of a relative or friend, as long as they “shall be properly taken care of, and shall be prevented from doing Injury to himself or others”. Commissioners in Lunacy could also order the removal of a lunatic from an asylum.

Interestingly, large parts of this Act relate to payments: payments to medical practitioners, payments to Visitors, and payments for the building and maintenance of the asylums. Although the Victorians liked to consider themselves philanthropists, they also expected to get paid for it.

Before I conclude, it is worth having a look at one or two of the forms that were used at that time.

One is the “Form of Annual Return” which all asylums had to produce. This consisted of “A True List of all Lunatics, Idiots, and other Persons of Unsound Mind” within their walls. This form included such headings as “Weekly cost of maintenance and clothing”, “Whether lunatic or idiot”, “Dangerous to himself or others”, whether they were “Of dirty Habits” (whatever that meant), and “For what length of time supposed to be of unsound mind.”

Why not join? With over 6,800 members, it's an ever growing, but nevertheless friendly and supportive group. AMHPs, AMHP trainees, social work and nursing students, service users, carers and relatives, and others with a professional or personal interest in mental health, such as psychiatrists, nurses, psychologists, police officers and bloggers, all get on together (most of the time!). It's a great place to pose a question or discuss thorny issues relating to the Mental Health Act, the Mental Capacity Act and mental health in general.